Mark and Bethany are two mismatched high school seniors in a new relationship.

Mark has adored Bethany since middle school, and she’s finally giving him a chance. Only, he’s clumsy at romance and knows he’ll lose her because of it. Bethany thinks Mark is sweet. Only, she’s afraid to commit her whole heart to him because he’s going into the army and she’s headed off to college.

Fifty years earlier, a boy and a girl from the same high school shared an amazing love story. They have now returned as ghosts and are interfering in Mark and Bethany’s relationship. Who are they? Why do they care what happens to Mark and Bethany?

A little about Donna first:

D. G. Driver is an optimist at heart, and that’s why she likes to write about young people making an impact on the world. You’ll find among her books a teen environmental activist, a young girl teaching people about autism acceptance and to stop bullying people with special needs, a princess who wants to be more than a prize for a prince, a boy who wins a girl’s heart by being genuine and chivalrous, and a girl who bravely searches for a friend lost along the shore of a dark lake. She is a multi-award-winning author of books for teens and tweens, but you’ll find some romance and horror stories in the anthologies, too. When Driver isn’t writing, she’s a teacher at an inclusive child development program in Nashville, TN. She might also take a break from writing once in a while to strut the stage in a local theater production. You’re guaranteed to find her belting out Broadway show tunes anytime she’s driving.

I love the cover for this book. It’s simple, elegant, and says romance to me. The writing is done well and the words flow nicely on the page. I really enjoyed how All the Love You Write started. I was very intrigued to find out about the notes Mark found and then they disappeared. That was a great beginning to this romance mixed with a ghost story.

The budding romance between Mark and Bethany made me feel bad for Mark. She made it pretty obvious to me that she didn’t really care about him. And then he wrote a letter with the help of a ghost. I think Donna did a great job with these two characters and how they interacted with each other. The ghosts were introduced into the story from the start, and I loved how Donna Driver set it all up.

The decisions the teenagers make feel real to me. I remember when I was in high school. It was all such a landmine for me, and I sympathize with Mark. Britany also felt like a real teenage girl, going back-and-forth over Mark and an ex-abusive boyfriend named Lance.

Loved reading the love letters with Mark and Bethany. Overall, I enjoyed All the Love You Write by D. G. Driver.

The story drags in places, and I do feel that with a good edit some of the less engaging parts could be cut to trim the overall size of the book.

(Warning: In the later portions of this review, I get very ranty, and when I get ranty, I swear a lot, so here’s your obligatory NSFW warning!)

The premise itself was rather interesting, as I am a sucker for romances where the relationship is built up through written communication such as letters, emails, or text messages. And the first couple of chapters were very promising in that regard: Mark and Bethany are texting back and forth as they try and figure out this whole “dating” thing. Cue me dying of happiness.

The suspense is terrible, I hope it’ll last

For the first six chapters, I was very intrigued to find out what would happen next. Mark is daydreaming in class and discovers that there was once a student who sat at his very desk who was dreaming about a girl named “Eileen.” Turns out that the boy who once dreamed about Eileen is now dead and wants to help Mark win Bethany’s affections, for some reason the ghost won’t explain. I was intrigued to learn who this ghost was and what his reasons were for helping Mark.

Mark tells Bethany and his mom about the ghost and they’re just like “Oh, that’s cool, there’s a ghost.” Ex-SQUEEZE ME? Normal people would be freaking out and taking their child to the doctor to make sure the kid’s head is still on straight. And if your boyfriend was like “Oh, a ghost told me how to get you to fall in love with me,” wouldn’t you be at least a LITTLE squicked out, like, “ew, what a creepy stalker,” sort of vibe? This just killed ALL believability for me and made me lose all respect for Bethany, Mark, and Mark’s mother.

Speaking of the characters…

I did not like a single character in this entire book. Mark? Weird, creepy stalker. Lance? Anger issues and abusive tendencies. Bethany? People-pleaser who can’t stand up for herself who has the opportunity to go through the most character development who, rather ironically, fails at everything despite being a straight-A student. Joe? Creepy grandfather who encourages his grandson to stalk a girl. Eileen? Creepy ghost-lady who ruins a girl’s life for no reason. Bethany’s so-called “friends”? Alpha-b*tches who encourage Bethany to “get back together” with Lance, said ex-boyfriend with anger management issues and abusive tendencies after they witness him assaulting Bethany. Bonus points for them continuing to try to bully Bethany into getting back together with Lance without anyone pointing out, “Hey, Lance is kind of abusive and has anger management issues, so maybe he’s not a good guy after all.” Mark’s parents? See the above-mentioned issue with the ghost just being “okay” with them.

And of them, Mark and Bethany were the literal worst. They didn’t work at all as a couple, with the only conflict in the entire book being a bunch of contrived misunderstandings. Both of them were stupid teenagers, and if they just TALKED all the conflict would vanish. “But wait,” I hear you saying. “This is a book about how writing letters and telling the person you love how you feel is the best way to get what you want, so it’s ironic that they can’t communicate! They have a lesson to learn that way!”

Normally I wouldn’t sin this trope so hard, especially in YA, but when the entire concept of your book is literally “Writing letters,” it’s kinda hard to NOT sin it because the irony hurts too much. Of course, if there was other conflict BESIDES the miscommunication, it would be less of a sin and more of an “oh, they’ve got a lesson to learn here, let’s see them get slapped with this irony” and it would have actually been interesting.

I quickly lost all respect for Bethany quite early on in the story–she couldn’t stand up for herself, she didn’t know what she wanted, and she was hella selfish. (we’re full-on ranting now–my California speak is showing. xD) Like when Mark posts a cute message on her Facebook wall, nothing too serious, just something along the lines of “I had lots of fun today! See you tomorrow at school!” This apparently isn’t good enough for her. No, she’s not trying to keep their relationship secret–she just thinks that it’s corny for Mark to use Facebook to talk to her instead of calling her or whatever. They get into another huge, melodramatic fight over this and Bethany goes on a date with her aforementioned abusive ex just to piss Mark off. 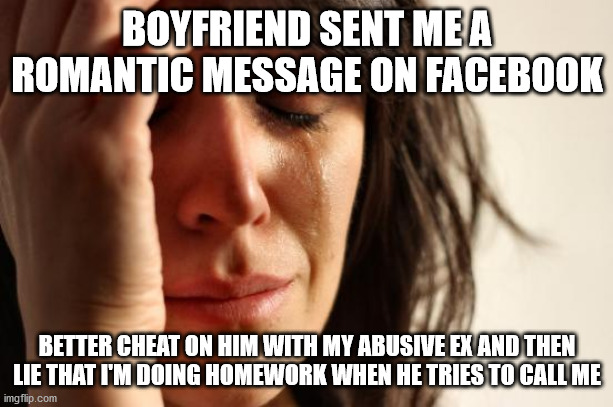 Ex-SQUEEZE me? I… I literally do not have the words for this. If you’re reading this review, I assume you see the problem with this already, so I’ll just continue.

I started to feel sorry for Mark at this point in the story, until…

Mark also lost my respect because he openly FLIRTS with one of Bethany’s friends, soon after she blows him off for the Facebook thing. Dude, no, even if you had properly broken up with her, THAT IS ONE OF THE FRIENDS WHO KEEPS PRESSURING BETHANY TO GET BACK WITH THE ABUSIVE EX SO OBVIOUSLY SHE ISN’T A VERY NICE PERSON.

And then Bethany starts getting haunted by the “Eileen” from the past because apparently “Eileen” doesn’t approve of Bethany being Mark’s girlfriend, which made no sense because aside from some self-confidence issues, and being selfish and petty that text messages and Facebook posts aren’t good enough for her, Bethany is a well-adjusted young woman, going off to college with a bright future ahead of her.

You know what would have made this book more interesting? If Mark had actually stood up for himself and said, “You know what, Bethany? I really love you and I want this relationship to work, but you keep getting pissed at me for the littlest of things. I try and be a good boyfriend to you by utilizing multiple forms of communication to let you know how I feel so that you have no doubts, but I’m not getting the same level of commitment from you. Lance is an abusive d*ckhead, yeah I said it, and yet you keep going out with him and letting your friends push you around. You’ve got some serious issues to work out, so until you do, I think it’s better if we don’t go out anymore.”

HOLY SHIT GIVE ME THAT NOVEL INSTEAD. Then, instead of the entire middle of the novel being like “Look at this stack of old letters I found in my dead grandma’s house, let’s kiss!” both of them could actually have some character development, repair their friendship and their broken relationship, the ghosts would have their own internal conflicts: Eileen would be happy that Mark and Bethany are no longer dating, but Joe would be conflicted and feel rather betrayed. Or if Mark figured out that Bethany was being haunted by Eileen and broke up with her to protect her and then Bethany has to become a better person in order to prove to Eileen that she deserves Mark and get him back (kind of cliche, but way better than we got) and then I wouldn’t have had the problem of…

Up until Chapter Seven, there was a whole little mystery building up about who the ghost was who was trying to help Mark, which kept me reading. I still hadn’t yet become invested in Mark and Bethany’s relationship, so the mystery about the ghost was the main driving force for me to want to keep reading. But as soon as we met Mark’s grandmother for the first time in Chapter Seven, all tension from the story immediately evaporated. I knew immediately who the ghost was, what he wanted from Mark, and why he couldn’t just rest in peace. All story-related questions were answered for me, and there was no reason to keep reading. I did keep reading after that, but it became a chore, and I alternated between slogging through chapters and skimming them, stopping to read only if there seemed to be something important.

In conclusion
All the Love You Write by DG Driver gets 2/5 stars from me for:
👍 An interesting story premise that makes me want to read
👍 The first few chapters being intriguing with the ghost aspect
👎 All tension evaporating from the story after Chapter Seven
👎 Unrealistic characters, none of whom are enjoyable enough to spend time with

Please feel free to share your review in the comments.

Every image of a cover is a link that leads to a third-party retailer (Amazon) and is an affiliate link. If you purchase the product in question by clicking on the cover, we earn a small portion of the profits from the retailer.